The Celestron 52252 100mm Ultima Zoom Spotting Scope is made by the Celestron optical company located in Torrance, California. This company is known for manufacturing high-quality telescopes, microscopes, binoculars, and spotting scopes. The company has an interesting history that is well worth learning a little about.

Disclosure: Sooke Outdoors, as an Amazon Associate, earns commissions on qualified purchases. This informative review article may contain affiliate links. Commission and earnings support our work. This means we may receive a commission if you purchase items from links embedded in the articles.

This Celestron Ultima 100 spotting scope is loaded with features, which is one of the reasons that this scope is so popular. Features of this scope include:

The multi-coating on this scope makes for clearer images and helps make all of the optical parts much more durable.

The magnification is between 22X and 60X with 4 levels of adjustment. The addition of a sight tube allows for quick targeting, which is great for observing wildlife that may be on the move. While the objective 100mm size allows for maximum light energy and the large Aperture means that the scope allows you to see in low light conditions.

An added benefit of this spotting scope is that it comes with a built-in T mount threading that allows you to use the zoom scope as a telephoto lens by attaching a T mount adapter suited to your camera. This will allow you to take fantastic pictures of animals, plants, and terrains that are even at a distance away.

Some people even use this spotter scope to view the moon or constellations on clearer nights. While this scope won’t replace a dedicated telescope it is definitely good for quick star gazing while sitting out in your backyard or on that hunting camping trip. 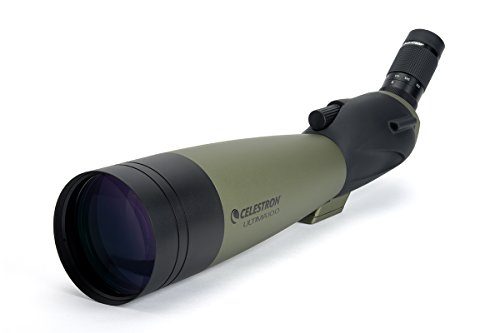 For those of you who want to know everything there is to know about this Celestron spotting scope here is a closer look at this scopes specifications.

What the Reviews Have To Say

Reviews for this scope are extremely good with more than 50% of the reviewers on Amazon giving this spotting scope 5 stars. Overall, users really like this scope and find a lot of different things about it that they find to be exceptional. Here is a look at the pros and cons of this scope.

Overall we find the Celestron 52252 100mm Ultima Zoom Spotting Scope to the best scope in the entire Celestron lineup and one of the best spotting scopes on today’s market. This scope is well made and is suitable for a wide variety of uses.

We find the large object diameter and the sight tube to be both handy on features you would find on more expensive spotting scopes. While this is not the cheapest scope on the market it is also not the most expensive and seems to be an excellent value for the features it provides.

The soft carrying case that comes with this scope not only makes this scope easy to carry but also serves as protection for the scope and increases the overall value of the scope.

We do feel that the lens cap for this the Celestron 52252 could be improved so that it better fits the lens of scope and remains in place when the scope is being carried inside the bag.

In 1955 a man by the name of Tom Johnson began a company called Valor Electronics, a military and electronics component company. However, in 1960 Mr. Johnson changed the focus of his company and founded an Astro-optical division to build telescopes. From that point on he centered his attention on making high-quality telescopes for both amateur and professional use.

Just three years after Johnson founded his telescope division Valor Electronics introduced an 18-inch Cassegrain telescope in 1963. The telescope was so impressive that it made the March issue of Sky and Telescope Magazine.

A year later Mr. Johnson created a method to produce a 20-inch Schmidt-Cassegrain and named it the Celestron C20. He also announced that he was changing the name of the company from Valor Electronics to Celestron-Pacific.

Five years were to pass before Celestron’s next major contribution to telescope manufacturing when the company presented an entire range of Schmidt-Cassegrain telescopes (the C6, C8, C10, C16, and C22) these telescopes were clearly recognized by their blue and white tubes.

In 1970, the company introduced an amateur telescope with an orange tube the C8 for under $1000.

In 1980 Tom Johnson sold the company and in the next few years, the future of this company was somewhat in doubt. However, in 1987 Celestron did introduce the first computerized telescope the CompusStar 14.

Between 1996 and 2001 This company introduced the first computerized telescope that ran on AA batteries and named it the Ultima 2000.

In 2006 Celestron came out with the Sky Scout Revolution which is a handheld device using GPS to identify thousands of stars, planets, and constellations. Just two years later the company introduced its first LCD digital microscope, which won the Innovations Award at the CES in 2009.

Some of Celestron’s NexStar SE products have been featured on the Big Bang theory.

The years between 2011 and 2013 were big years for Celestron with the introduction of the Sky Prodigy a self-aligning telescope, the company’s CPC925 being installed about the ISS as part of NASA’s ISERV mission and the introducti8on of StarSense auto-align, accessories that can be attached to all Celestron’s computerized telescopes which will allow the telescope to allow itself within 3 minutes.

In 2014 Celestron introduced its first WIFI telescope and released an astrograph with native f/2.2 imaging that was created by David Rowe and Mark Ackermann who teamed up with Celestron for the sole purpose of making the astrograph.

Throughout Celestron’s history the company has changed hands a number of times and today not only manufactures telescopes but also manufactures high-quality microscopes, binoculars and spotting scopes as well as various mounts.

What Is A Spotting Scope Used For?

When using a spotting scope it is best to place the scope on a tripod.